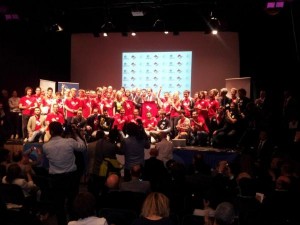 Italian prime minister Enrico Letta with us – participants of Techpeaks 2013

Techpeaks itself is very innovative experiment among accelerators. It is the only long-term program accepting individuals. It leads individuals to form teams, succeed in pitching their projects and set up companies in Italy. The region of Trentino offers 25 000 € to every accepted project – not bad at all.

Naturally, one may ask whether it is viable to build teams and come up with a reasonable project at the very same moment. So, from my experience, it is possible, but it is not easy at all. Organizers tried to offer us enough opportunities for getting know each other. Nevertheless, quite a lot of us considered a moment of team forming too early. People were pushed to form teams just one week after arrival.

But it was a long time ago. Let’s look at the situation from today’s perspective. A month and a half has passed. Those who arrived into a program as a part of a team had clearly an advantage. Teams formed of individuals succeeded mostly when they built upon an idea which was at least partially completed. On contrary, teams that were trying to develop something from a scratch were typically failing in front of a committee. Since people in teams are just getting know each other, team members fluctulate and teams are splitting a lot. It has also happened that one team split two weeks after they got funded – they have not found an agreement on equity.

Now, a bit of stats:

It is clear that committee is not very nice to us and does not give any funding for free. Just the opposite. Even projects that had already earned some money had big troubles with acceptance. Moreover, approximately 40 participants are going to pitch for funding in the remaining 2 rounds. Unfortunetely, I am one of these fourty people. It is apparently going to be a pretty thrilling experience yet.

In the next post I would like to provide more insights into a program of Techpeaks and share what I have learned and experienced here. Stay tuned.

Iconic One Theme | Powered by Wordpress